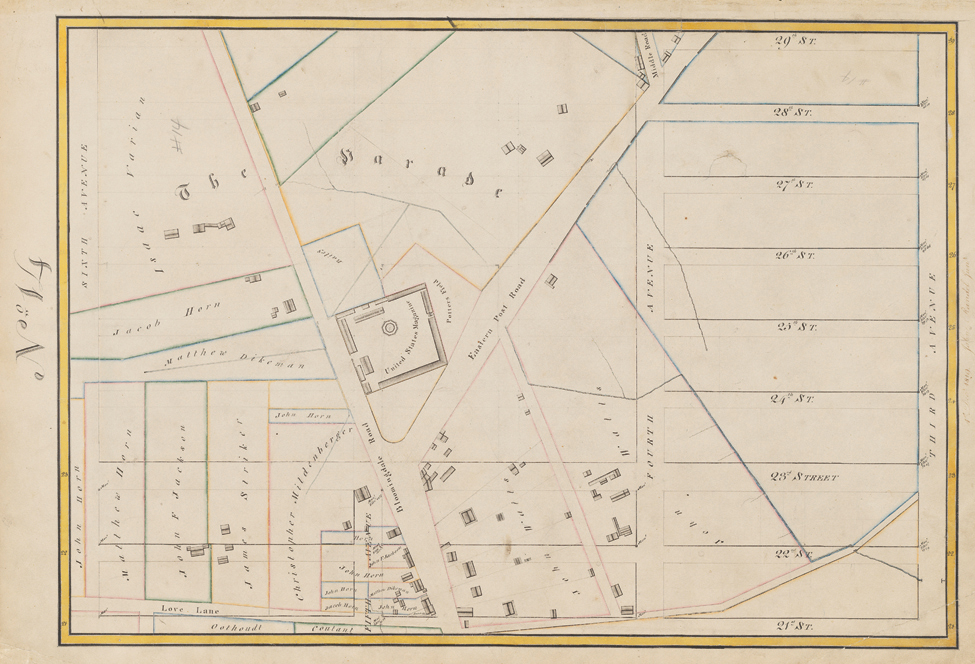 Back to Gallery
Image 21

With memories of the Revolutionary War and a new confrontation with England looming on the horizon, the commissioners deemed it crucial to provide a large space for military exercise. “The question,” they wrote, “was not and could not be whether there should be a Grand Parade but where it should be placed and what should be its size.” In their "Remarks", the commissioners noted that the high cost of land led them to site the military parade ground north of the built-up portion of the island, from 23rd to 34th Street between Third and Seventh Avenues. This site was the largest open space they created and served as the terminus for Bloomingdale Road. As the Randel Farm Map illustrates, the commissioners may also have selected the location because a U.S. military arsenal (magazine) already existed at the south side of the square, on land the city had ceded to the federal government in 1807.

Most of the intended parade ground was private property, and “opening” such a sizeable square and paying the current landowners in damages constituted a heavy municipal expense. As the Randel map shows, Isaac Varian, a successful farmer and grandfather of the future New York mayor with the same name, and John Watts, a lawyer and merchant who used the land as a country home, owned large swaths of the area. In 1814 city officials shrank the Parade to roughly 90 acres to reduce costs and renamed it Madison Square Park. In 1828 they eliminated the Parade from the city plan, after the city treasury estimated that it would cost the city over a million dollars to purchase the property from its present owners. AR