The Commissioners’ Plan of 1811 was stimulated by the city’s explosive growth and a conviction that New York was destined for greatness. Read More

The population of New York climbed steeply after the Revolution. In the first federal census in 1790, Manhattan had 32,328 residents, with another 19,000 in the countryside that would later become New York. Philadelphia was the next largest city, with a population of 28,522, followed by Boston with 18,320. But between 1790 and 1810, Manhattan’s population tripled to just under 100,000. Driving this population growth was the port economy: during the same period, from 1790 to 1810, the value of exports from New York tripled, putting its revenues well ahead of other American ports.

The Commissioners were charged in 1807 with producing a plan to structure this growth. Completing their work in 1811, they had breathtaking ambitions for New York’s physical expansion, population growth, and civic capacity. “It may be a subject of merriment that the commissioners have provided space for a greater population than is collected at any spot on this side of China,” they acknowledged in their explanatory “Remarks.” (The population of Peking was then over one million.) In fact, the commissioners underestimated the city’s propulsive growth that their plan enabled, if not accelerated. Whereas they had anticipated that in 1860 a city of 400,000 would reach 34th Street, New York would have twice as many people that year and would begin to plan its expansion beyond 155th Street, where the commissioners had ended the grid.

The simplicity of the Commissioners’ Plan is an illusion. As the city leadership anticipated, the plan faced a barrage of challenges, and implementation would require steadfast government commitment over many generations. It is fitting that the milestones marked on the 1811 plan are measured from City Hall; this detail speaks to the authority of city government that underwrites the Commissioners’ Plan of 1811 and propelled it into the future. Show Less 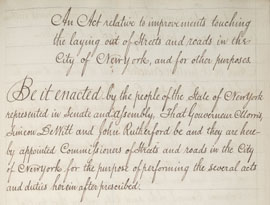 In January 1804, the Common Council, the forerunner of today’s City Council, took the first step to create an urban master plan by directing the Street Commissioner to... Read More 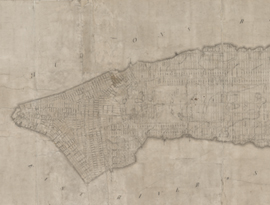 As required by the 1807 act, the commissioners produced three large maps, each almost nine feet long. All three copies survive.
The 1811 plan conveys the illusion of the... Read More 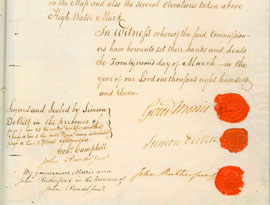 The 1811 plan was accompanied by explanatory remarks; these form the only account the commissioners gave of their work.
The commissioners’ most important... Read More 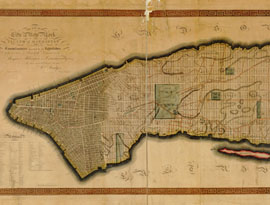 In November 1811, seven months after Randel filed his three official drawings, William Bridges published a print copy. It is unclear how he gained access to the... Read More 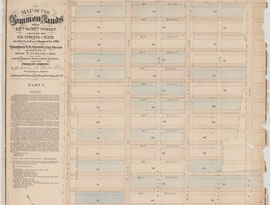 John Bute Holmes’s 1874 map illustrates how much the 1811 commissioners borrowed from Goerck’s 1796 plan of the Common Lands, including certain block and street... Read More 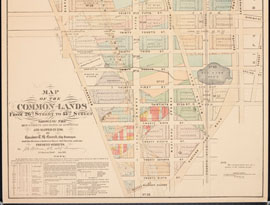 This map of the area between 26th and 43rd Streets around Fifth Avenue shows the relationship between the south end of the Common Lands and the 1811 grid. It indicates... Read More