The three commissioners were prominent men with achievements relevant to their task to lay out New York City’s future. Gouverneur Morris and his half-nephew-in-law, John Rutherford, were wealthy lifetime residents of the New York City area with long histories in land administration and business affairs. Albany resident Simeon De Witt was among the most accomplished surveyors in the country.

All we have about the selection of the street commissioners is the memorial from the Common Council to the state legislature recommending De Witt, Morris, and Rutherfurd “as fit and proper persons to be appointed.”

Newspaper reporting, other than surprisingly cursory announcements of the commission’s formation and its conclusion, is nonexistent. The archival record is of no more help. Rutherfurd and De Witt left no papers that amplify their roles. Even Morris’s voluminous personal papers for the period carry more details of his fishing exploits, dinner guests, and indispositions from gout and urinary blockage than the substance of his commission work. On Monday, June 29, 1807, Morris recorded in his diary: “Meet with Dewitt one of the Comm[issioners] and do business.” The specifics of the business on that early and presumably important day in their tenure, and on dozens of other days with similarly opaque entries over the intervening four years, is entirely unknown. On Thursday, March 28, 1811: “Raw damp and NEast Wind. Go to town on Business of the Comm[ission] to lay out Manhattan Island—Dine with Mr. Rutherford and execute the Maps—Much indisposed [from gout].” Thus, on the day Morris signed off on the great grid, we learn about the weather and his wellbeing, and nothing about the magnitude of the occasion. GK Show Less 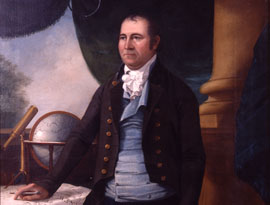 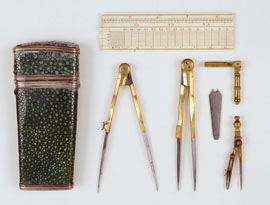 Simeon De Witt would have used these drafting implements to draw plans and surveys. The implements are unpacked from a case. At top is a flat ivory scale, engraved with... Read More 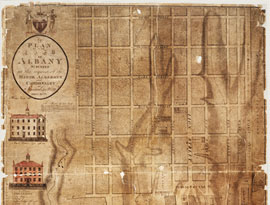 Before his work on the Manhattan grid, Simeon De Witt planned an extension of Albany on a grid plan. Like many river-port cities, Albany began life as a series of blocks... Read More 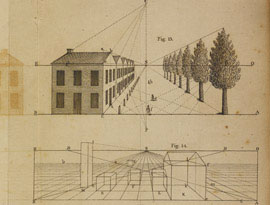 This fold-out engraving from Simeon De Witt’s The Elements of Perspective directs how to use geometry to construct a perspective view of an object—in this case, a city... Read More 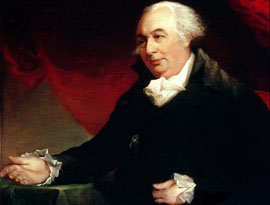 Typical of many Founding Fathers, Gouverneur Morris (1752–1816) was an extraordinary soul. In life, he was brilliant but often out of bounds, with reactionary political... Read More 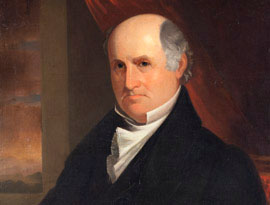 Of the three street commissioners, John Rutherfurd (1760–1840) was the only one born in Manhattan but brought the least relevant experience to the work. He spent most... Read More