The look and feel of New York’s streets would be transformed by two things in the late 19th and early 20th centuries: the opening of the subway and the burying of communications and electricity cabling that had wound itself into increasingly intricate patterns above city streets by the late 1880s. KA 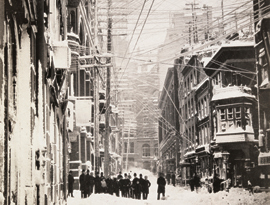 Wires above Ground: The Blizzard of 1888

Although initiatives to place both trains and cables underground had been proposed earlier, the blizzard of 1888 gave the idea momentum. Read More 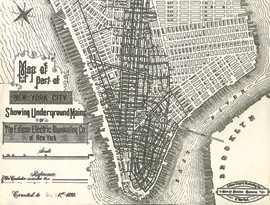 New York’s utilities, like its transport system, have at times lived above ground and at times below. Read More 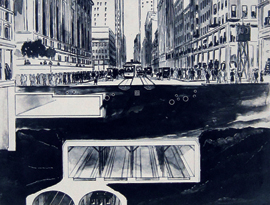 The commissioner’s grid did more than lay out a plan for streets and real estate.
Read More 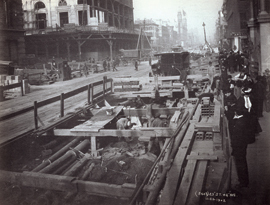 The building of New York’s subway in the early decades of the 20th century relied on a number of construction technologies, some more disruptive to life on city streets… Read More 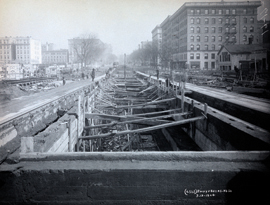 This 1904 photograph documents the cut-and-cover construction of the first subway line, along Broadway at the 96th Street stop.