Living on The Grid

Sidewalks are the invisible third element of the Commissioners’ Plan of 1811. The plan itself does not show them, and the commissioners’ remarks never mention them, but sidewalks are as much a part of the grid as the streets and blocks that they join.

When the commissioners drew up their plans for the grid, they may not have included specifications for sidewalks because these were already covered by preexisting legislation. Laws introduced after 1811 preserved two basic principles from the previous legislation: first, that the width of the sidewalk should be correlated to the width of the street, and second, that construction and maintenance of the sidewalk should remain the responsibility of the adjacent property owner even though the city owns and regulates the walk itself. Read More

According to city ordinances, sidewalks should be equal to one-fifth the width of the street. Given the street widths of the 1811 grid (60 feet for the east–west streets and 100 feet for the north–south avenues as well as for 15 of the east–west streets), the sidewalks were required to be 20 feet wide on the avenues and the wider cross-town streets, and 14 feet wide on the regular crosstown streets. As alterations disturbed the original consistency and uniformity of the grid over time, the sidewalks reflected those changes. For example, when Central Park was created at the center of the island, the park commissioners widened the sidewalks along its borders in order to create broad, shaded walks under the trees.

The laws regulating sidewalk construction and maintenance also grew increasingly specific after 1811. For instance, legislation detailed the type of stone property owners should use to pave their walks as well as the proper joining method. By requiring all property owners to build the sidewalks at their lots in unison and to the same standard of construction, the city ensured that sidewalks would reinforce the uniformity of the grid.

Even though the ordinances required property owners to pay for the walks fronting their lots, to keep them clear of snow and trash, and to repair them when necessary, sidewalks belonged to the public realm. The city controlled not only the physical development of this space, but also the activities that could be performed there. CY
Show Less 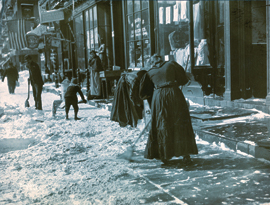 Although the city is responsible for clearing the streets after a snowfall, since the early nineteenth century property owners must remove snow and ice from the sidewalks… Read More 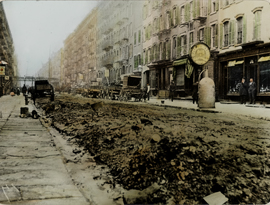 As the development of the grid advanced during the 19th century, keeping the streets clear became an increasingly complex problem. Read More 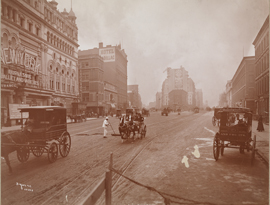 Waring brought a military discipline to the department and overhauled its operations. Read More 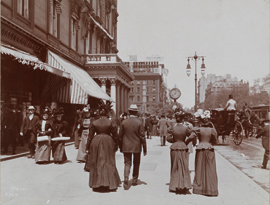 When the grid began to fill out in the second half of the 19th century, its long axial streets provided the perfect setting for bourgeois Manhattanites to promenade. Read More 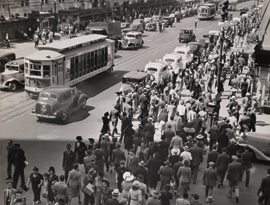 Berenice Abbott’s photograph of the intersection of Fifth Avenue and 42nd Street shows why 100-foot-wide streets can feel narrow on the grid. Read More 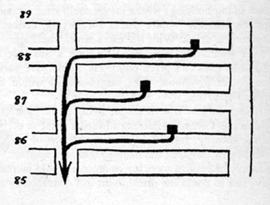 The Benefits of Short Blocks

While traffic engineers viewed the grid’s many intersections as a problem to overcome, Jane Jacobs sought to create more of them. Read More 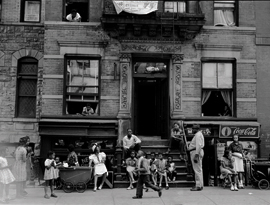 Although they are not particular to Manhattan, stoops are a particularly useful architectural feature on the grid. Read More 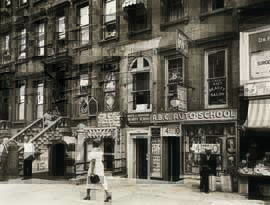 Because of their convenience, stoops are one of the most common methods for connecting streets and buildings on the grid… Read More 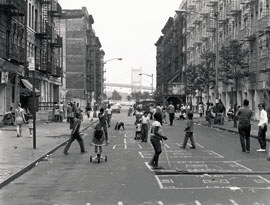 Bruce Davidson spent two years photographing the residents of one block of East 100th Street in the mid-1960s.
Read More 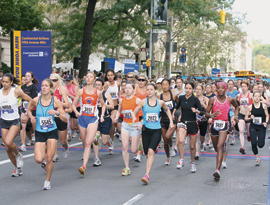 “Twenty short blocks equal a mile” is an indispensable rule of thumb for judging distances in Manhattan, a convenient side benefit of the grid. Read More 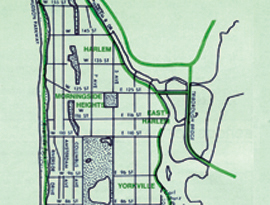 In Manhattan, the grid makes it easy to locate addresses on the cross-streets, because the numbering starts at Fifth Avenue and increases as one moves east or west… Read More