Before the grid, Manhattan had hills, streams, beaches, ponds, wetlands, rock formations, and cliffs. Building out the grid involved significant reshaping of the land conditions, and although traces of some of these geographical features remain visible, it is only in early prints, and especially the British Headquarters Map, that the geography of the island can be seen. 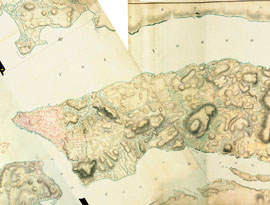 This map, drawn by British military cartographers toward the end of the American Revolution, shows the farms, country roads, isolated homesteads, fortifications, and the... Read More 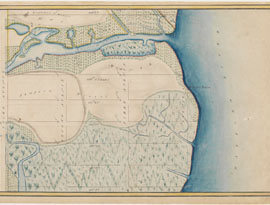 The gridded streets and avenues of the Commissioners’ Plan were overlaid upon hills and wetlands alike. However, the commissioners did set aside an area on the East Side... Read More 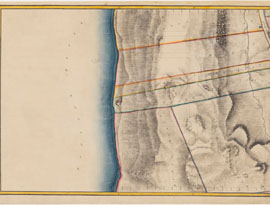 This map depicts the area a few blocks north of where the George Washington Bridge now spans the Hudson River, at West 178th Street. The area has some of Manhattan’s... Read More