The Commissioners emphasized the benefits of a rectangular city plan for the construction of houses, but did not comment on the preceding step: the conversion of large city blocks into residential lots. An unstated advantage of the grid was its role in this conversion process: it created an easy format for the subdivision and development of land.

Before the grid, descriptive details delineated legal boundaries—a fence, a creek, a stone, sometimes a country road. On the grid, blocks were cut up into easily measured, stable, rectangular parcels. Read More The grid system stripped the land of topographical markers and specificity, and repackaged it as a standardized building lot. In short, land became a commodity. Of course, land had been bought and sold in New York before 1811, but the grid reconceptualized the island in one fell swoop, rationalized the real estate market, and enabled a change in the scale of development. In this sense, the 1811 grid gave birth to New York’s modern real estate market.

A strength of the grid is the compatibility of its uniform structure with individual choices. The 1811 plan did not dictate lot dimensions, but the blocks yielded a modular system; a standard lot was 100 feet deep (half the block depth) and 20 or 25 feet wide. These lot widths were compatible with the varying block lengths and appropriate for individual town houses. As pre-grid estates were cut into blocks, owners put their property on the market, usually by auction, with modular subdivision plans such that purchasers could aggregate any number of lots. Show Less 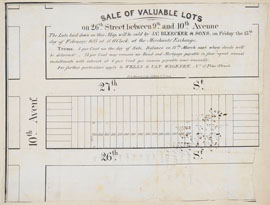 This auction announcement illustrates the prototypical subdivision of a grid block. All lots are 25 feet wide by 100 feet deep. On the short ends of the block, eight... Read More 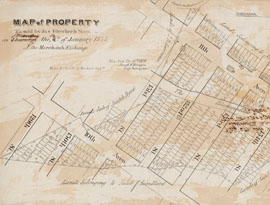 The property for sale was at the north end of the grid, from 150th to 155th Street between Tenth and Eleventh Avenues. Its jagged shape overlaps several city blocks... Read More 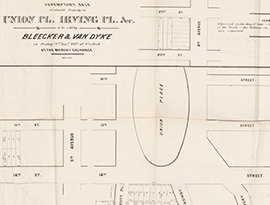 This plan records the first step in the transformation of Union Place from a triangular street intersection to a formal space with an oval lawn. In 1830 the owners of... Read More 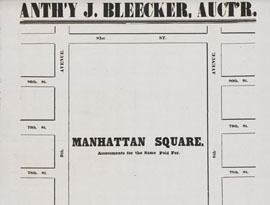 Lots for Sale near Manhattan Square, 1852 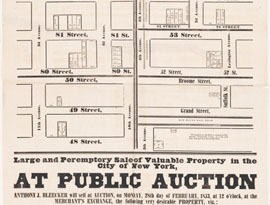 This broadside advertises a public auction of scattered lots across the city and provides basic information: lot size and whether a building is on the lot. The lot... Read More 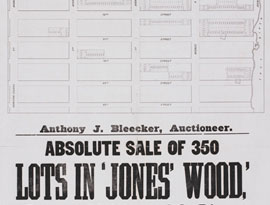 Jones’ Woods was a heavily forested area on the East River between 66th and 75th Streets. The city had intended it to serve as Manhattan’s primary park before Central... Read More 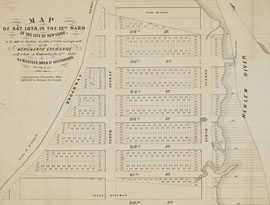 This plan extends the grid to the northern tip of Manhattan, from 211th to 216th Street, and shows the normative grid subdivision: a standard block, 800 by 200 feet, is... Read More 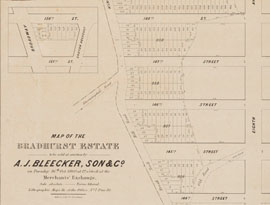 This subdivision plan shows the typical challenge of conforming a pre-grid property to the grid system. The Bradhurst estate bordered Kingsbridge Road from approximately... Read More 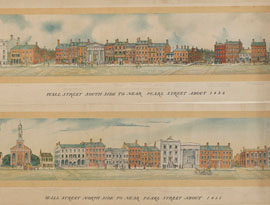 Land auctions took place at the Merchants’ Exchange (1827-35), seen at left in this view of the south side of Wall Street. The building was destroyed by a fire that... Read More 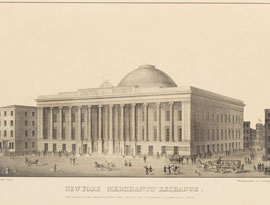 After the great fire of 1835, the Merchants’ Exchange (1836-41) was rebuilt on the same site on a grander scale. Designed by Isaiah Rogers, the building featured a dome... Read More 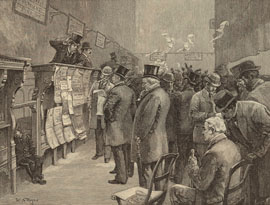 Land auctions moved to the Real Estate Exchange, which opened on Liberty Street in 1885. The new facility was more than an upgrade from the basement room at the... Read More 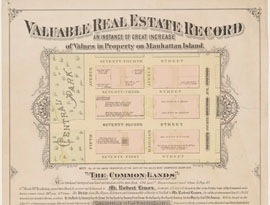 This broadside celebrates the rising value of Manhattan real estate, as exemplified by the Upper East Side estate of Robert Lenox (1759–1839). In 1818, according to the... Read More 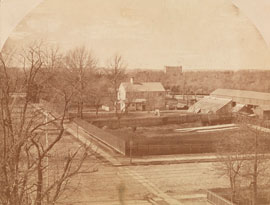 From the southeast corner of 71st Street (at left) and Madison Avenue, we look west, across Madison Avenue to the Lenox Farm, which occupies the full block. Beyond... Read More 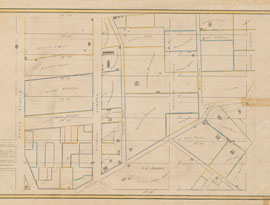 When Clement Clarke Moore, a professor at Columbia College, inherited his family’s estate in 1813, he had every intention of maintaining it as his summer country... Read More 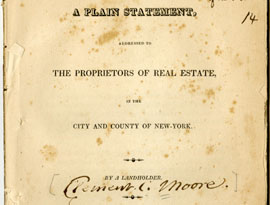 Indignant over the way the city’s roads had been cut through his family’s country property, Moore published A Plain Statement in 1818, beseeching landowners to rise up... Read More 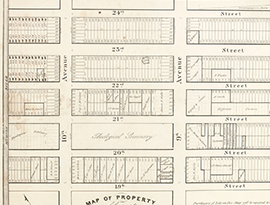 Attuned to the growing value of his property, Moore adapted to the inexorable development of the grid. Throughout the 1820s, the Common Council opened streets and... Read More 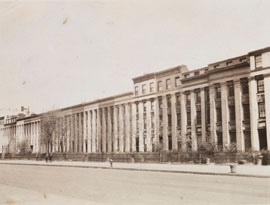 In 1845 Presbyterian minister Cyrus Mason and his business partner William Torrey leased the entire block between 23rd and 24th Streets from Clement C. Moore, on which... Read More 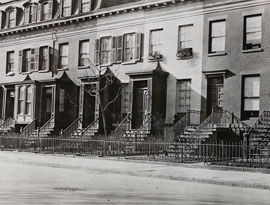 In developing the northern half of the block they leased from Clement C. Moore, Cyrus Mason and William Torrey had a bit more freedom than they did with the southern... Read More 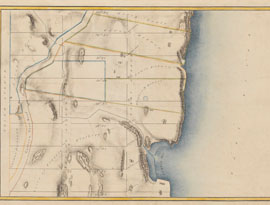 This Randel Farm Map depicts the area around Turtle Bay, a cove on the East River where the United Nations is now located. The name is an Anglicization of the original... Read More 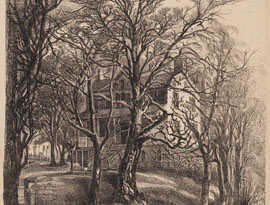 Mount Pleasant, the historic Beekman mansion, stood for more than 100 years, from the 1760s to 1874, on two sites near the East River. Artist Eliza Greatorex portrayed... Read More 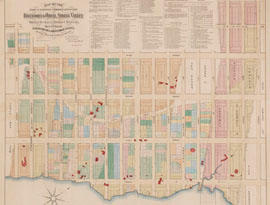 Elements of both the old and new city plan can be seen in the area north of Turtle Bay on this map of 1870. The large farms and estates—those belonging to the Beekmans... Read More 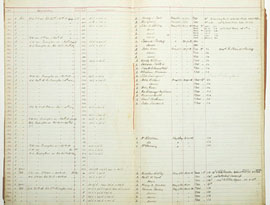 James W. Beekman became a successful real estate developer, with his hand in the development of various parts of Manhattan. In 1868, as the real estate market was... Read More 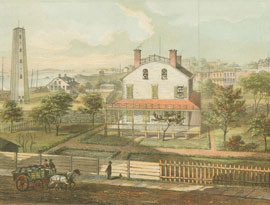 While James W. Beekman steered the development of his property into residences, the area around his estate developed haphazardly, with factories, slaughterhouses, mills... Read More