John Jacob Astor (1763–1848) embodies the rise of New York real estate: he initially made his fortune through international commerce, but in the 1830s shifted exclusively to real estate development and investing. As Astor’s fortune illustrates, by the mid-19th century, real estate had joined commerce and finance as the pillars of wealth in New York City.

New York real estate made John Jacob Astor one of the richest, if not the richest, man in America at the time of his death. Astor personified a mythic dimension of New York: he had an ironclad faith in rising New York land values. Read More A retrospective reflection toward the end of his life epitomizes this view: “Could I begin life again knowing what I now know and had money to invest, I would buy every foot of land on the island of Manhattan.”

Astor’s extracurricular interests had city-building aspects too: Astor House, the Park Theater, and the Astor Library. Astor poured his heart into the construction of Astor House (1834–36; briefly called the Park Hotel), a luxury hotel that he built on the site of his house on Broadway at Vesey Street. A quintessential urban building type, Astor House (demolished in 1913) was the first of a series of great New York hotels that the Astor dynasty would develop, including the Hotel Astor (Times Square), the New Netherland Hotel (Fifth Avenue and 59th Street), the Waldorf (Fifth Avenue and 33rd Street, on the site of another family home; it was demolished for the Empire State Building), and the Waldorf-Astoria (Park Avenue at 50th Street).

A fan of the theater, he co-owned the city’s best playhouse, the Park Theater, from 1806 to 1848, and rebuilt it when it was destroyed by fire. His heirs eventually were associated with the development of the theater district at Times Square, where thanks to John Jay’s early investments, the family had extensive holdings.

Perhaps the best example of Astor’s development activity centers on Lafayette Place (later Lafayette Street). Just south of the grid, Astor owned Vauxhall Garden, an outdoor garden and entertainment spot between Broadway and the Bowery. The 1811 plan shows a large, blank trapezoid on this site; the commissioners may well have started the grid at Art Street to steer clear of Astor’s property. In 1825 Astor petitioned the Common Council to open a north-south road through that property, from Great Jones Street to Art Street, and a few years later beyond to 8th Street. It was named Lafayette Place in honor of the Marquis de La Fayette, the French hero of the American Revolutionary War who made a triumphal visit to New York in 1824–25. The council approved the request because “by such Opening many valuable building Lots would be afforded.”

Lafayette Place became an Astor domain. Astor’s son William, who inherited the bulk of his father’s fortune, built his house on the street. John Jacob also favored the street with his only substantial philanthropic bequest: he donated $400,000 to establish and operate the Astor Library and provided land for it at the corner of Lafayette Place and Art Street, which was subsequently renamed Astor Place. The Astor Library lives on, absorbed into the great New York Public Library, and the original building on Lafayette Place is now home to the New Public Theater.

To find the properties that John Jacob Astor owned in 1818-19, go to the Interactive Randel Farm Map and search under his name. Show Less 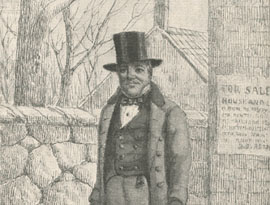 This portrait of Astor pays homage to his importance in the New York real estate market. On the left, the landscape—a stone wall, trees, a smoking chimney on a one-story... Read More 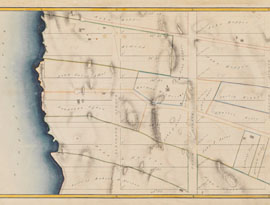 In the middle of this Randel Farm Map, John Jacob Astor’s properties are outlined in orange. Tenth Avenue and the cross streets from 47th to 50th have cut one property... Read More 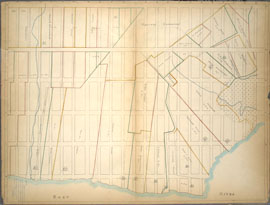 From the time he emigrated from Germany to New York, Astor lived on lower Broadway, a center of wealth in old New York. In 1828 23 percent of the city’s 500 wealthiest... Read More 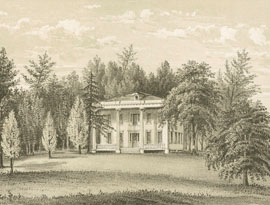 Astor’s country house stood near 87th Street and Avenue A (York Avenue), with a prospect of the East River at the strait called Hell Gate, named for the dangerous waters. Read More 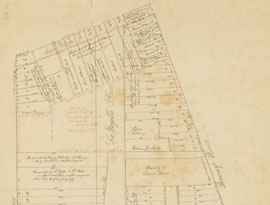 This subdivision plan shows “the old line of Art Street,” which was extended and renamed Astor Place, after John Jacob Astor. On the east side of the perpendicular street... Read More