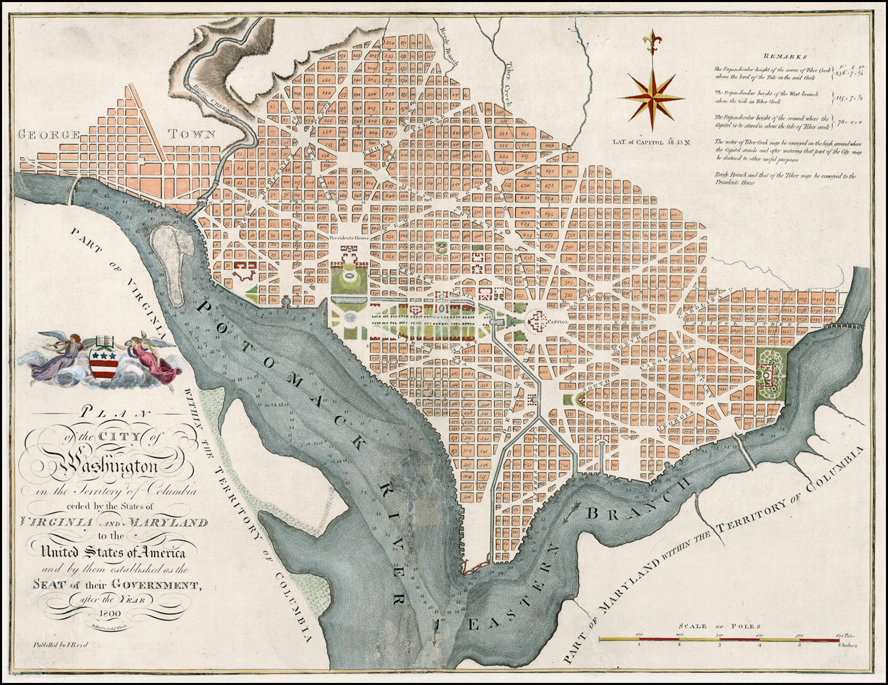 John Reid, “Plan of the City of Washington in the Territory of Columbia ceded by the States of Virginia and Maryland to the United States of America and by them established as the Seat of their Government after the Year 1800,” 1795. Hand-colored engraving

In evaluating options in New York City, the commissioners naturally considered the nation’s new capital. Only 20 years earlier, in 1791, architect-engineer Pierre Charles L’Enfant established the plan of Washington, D.C., and it is striking that the commissioners purposefully rejected it as a model. While their "Remarks" refer explicitly only to Paris and London, there was an implied contrast between their vision of New York with rectangular house lots, and the capital city, designed for government and the representation of power.

In L’Enfant’s plan an orthogonal grid is overlaid with a larger-scale grid of diagonal streets punctuated by frequent squares. The intersections of the two grids produced non-rectangular lots that added to the cost and complexity of construction, complications the commissioners wished to avoid. But an advantage of the plan of Washington is that it creates opportunities for buildings to call attention to themselves in the urban fabric. Monuments could be sited at the end of a vista, such as the Capitol, or face a square, such as the White House, whereas in New York individual structures were submerged in the overall unity of the street and block. The scale of Washington was also monumental: L’Enfant’s avenues had an 80-foot carriageway with 40 feet on each side for a tree-covered walk, or 160 feet in total, compared to 100 feet for New York’s avenues.

Washington and New York now stand for two different approaches to city planning, and it is clear that the commissioners saw it this way in 1811.