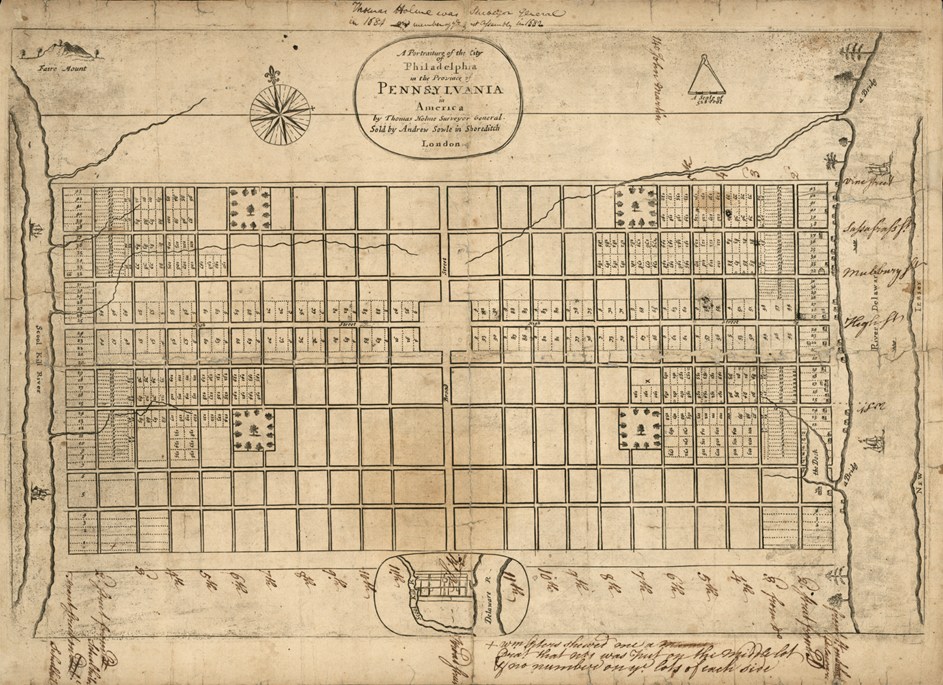 Thomas Holme, “A portraiture of the city of Philadelphia in the province of Pennsylvania in America,” 1683

The Athenaeum of Philadelphia

In 1681 King Charles II granted William Penn a huge tract of land fronting on the Delaware River. A year later, Penn arrived in his new colony and devised a plan for the main settlement of the colony, Philadelphia. Over the two-mile-wide isthmus between the Delaware and Schuylkill Rivers, Penn laid a grid of streets, an idea unprecedented in English America at the time. The blocks bounded by these streets, some as big as 400 by 500 feet, were larger than the city blocks Penn would have known in London. Penn intended that his town would never get as congested as central London: he wanted the houses of his “green country town” to stand among generous kitchen gardens. To further “ventilate” this town of gardens, two 100-foot-wide streets (now Market and Broad Streets) split the grid, and at their crossing he envisioned a great civic square. To complete the plan, each of the quadrants was given its own park, carved out of the grid of blocks.

Almost from the beginning, though, Philadelphians chose to live in row houses, and that presented a problem: getting light from only the front and back, a row-house can only be about three rooms deep; if you line all sides of a 400-foot-thick block with row-houses you get a big, blank empty space in the middle. And so, early on, people began to subdivide the big blocks, sometimes horizontally, sometimes vertically, often in both directions. The result is today’s complex pattern of minor streets laid into the simpler pattern of main streets.

As the city grew outward, it extended the existing north–south streets; but Philadelphians made the blocks between those streets much like Manhattan blocks—long and thin, ideal for parallel lines of back-to-back row-houses. BH