These maps depict the gradual erasure of old weaving streets and their replacement by straight roads as the grid advanced up the island. Although there were departures from the 1811 plan, those new streets generally followed the system of the grid. 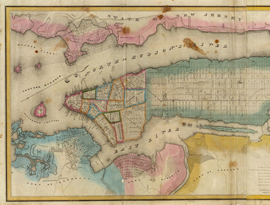 By 1832, when David Burr included this map in his landmark An Atlas of the State of New York, New York City was in a period of dramatic population growth… Read More 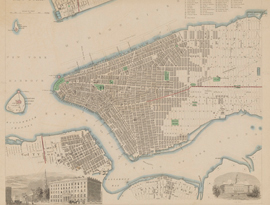 The Society for the Diffusion of Knowledge, established in 1828 in England, published a series of inexpensive maps to educate the general public. Read More 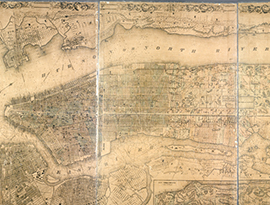 The shaded city blocks on this 1854 map indicate that the front edge of development has reached about 50th Street. Read More 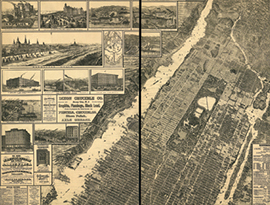 While not the first bird’s-eye view of New York, this map, drafted by William L. Taylor, significantly advanced the genre’s representation of Manhattan. Read More 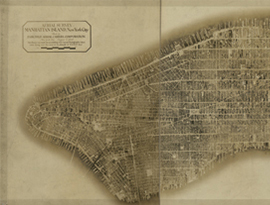 Pieced together from 100 aerial photographs, this 8-foot-long photomosaic of Manhattan demonstrates the full build out of the grid… Read More