By the 1950s, the 1916 Zoning Resolution had been qualified by so many amendments that it was no longer considered to be a useful tool for modulating the density of the grid. In 1960 the Board of Estimate passed a new zoning resolution, to become effective the following year. It replaced the old law with a set of rules designed to encourage builders to incorporate open space onto their lots. Read More Using Mies van der Rohe’s Seagram Building on Park Avenue as a model, the 1961 Zoning Resolution rewarded property owners who reserved a portion of their lots for public space with floor area bonuses that allowed them to build taller towers. These plazas decompressed crowded sidewalks and interrupted the plane of the lot-line street wall. 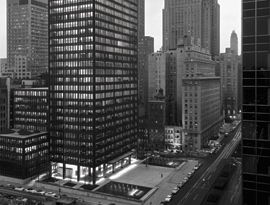 In 1958, the same year that the architecture and urban planning firm of Voorhees Walker Smith & Smith submitted its new zoning proposal to the New York City Planning… Read More 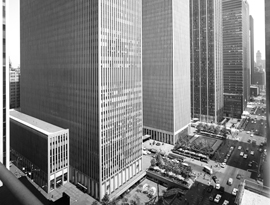 The impact of the 1961 Zoning Resolution on the Manhattan grid can be seen most clearly on Sixth Avenue, along the stretch between 47th and 51st Streets… Read More 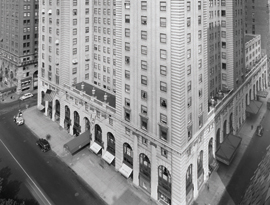 Until its demolition in 1964, the Savoy Plaza Hotel formed part of the ring of buildings framing Grand Army Plaza at the southeastern tip of Central Park at Fifth Avenue. Read More 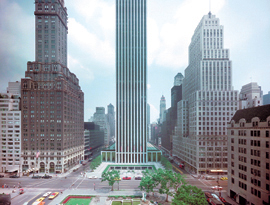