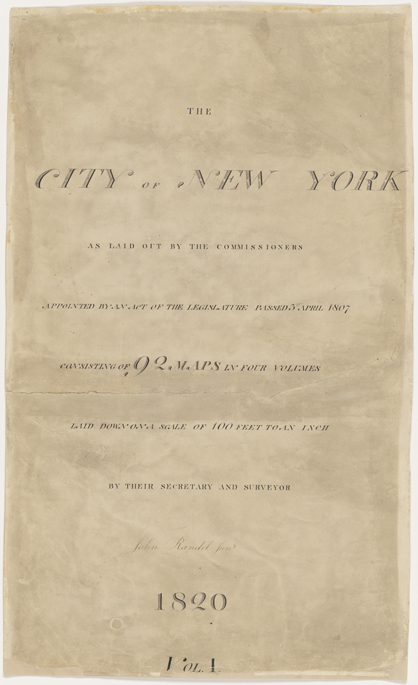 Frontispiece to The City of New York as Laid out by the Commissioners (known as the Randel Farm Maps), vol. 1, 1818–20

The farm maps, as they have come to be called, drawn up by John Randel, Jr., portray early-19th-century Manhattan in stunning and rare detail, at a scale of 100 feet to one inch. No other map of similar scale appears to exist for another American city during that era. Laid out together, the 92 sheets create a map 11 feet wide and 50 feet long, depicting in wonderful color Manhattan’s marshes, hills, rocks, buildings and property lines—as well as the faint lines of the grid descending on them. I. N. Phelps Stokes, author of The Iconography of Manhattan Island 1498–1909, called Randel’s series “the most complete and valuable topographical record of the period that exists. It is, in fact, the only exact early topographical map of the island.” Randel worked on the maps for the Common Council between 1818 and 1820, assisted at times by his wife, Matilda Randel, who shaded and pasted some of the maps. He had first proposed a large-scale map in 1812, but a formal contract was not issued until six years later—indeed, members of Common Council had forgotten the earlier agreement and needed to be reminded. Randel received $3,300 for his efforts. MH