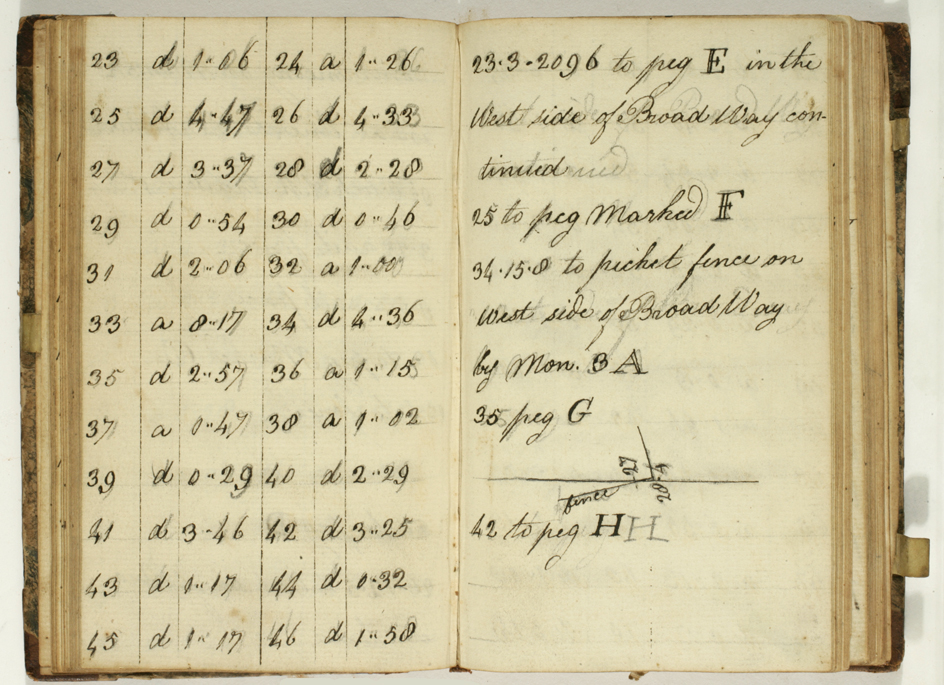 The process of accurately determining block length was quite involved. These pages from an 1811 field book show measurements of angles of ascent and descent, apparently given in degrees and minutes, along a line on the west side of Broadway. The first and fourth columns depict what are probably rod measures. Randel used chains and 10-foot, 30-foot, and 50-foot rods. In this instance, he or his crew moved from one previously established and temporary marker—likely a wooden peg—to another (from E to H), and past one permanent marker, monument 3A. The left page begins with the 23rd rod and ends with the 46th. The ascent (a) or descent (d) is noted in the second and fifth columns, and the degree thereof is recorded in the third and sixth columns. For instance, there is a gentle descent between rod 23 and 24; a precipitous ascent between rod 33 and 34.

As surveyors measured, they would count the number of rods and then tally the total number of rods to get distance. The distance would be calculated on a flat plane—that is, as if the ground were level. Because of the undulating topography of Manhattan, Randel was rarely on level ground, so he used angles of ascent or descent to calculate the distance on a level using the geometry of triangles. He knew the value of one angle (the ascent or descent value) and the length of one side of the triangle (the rod); a second angle of the triangle was 90 degrees (think of a plumb bob dropped from the end of the rod to the imaginary level line, which it would intersect at a right angle). With that information, Randel could calculate the length of the triangle side representing the distance on the level. Doing this for the entire island required thousands of calculations; Randel requested additional money from the Common Council for his exertions—which he did not receive. MH