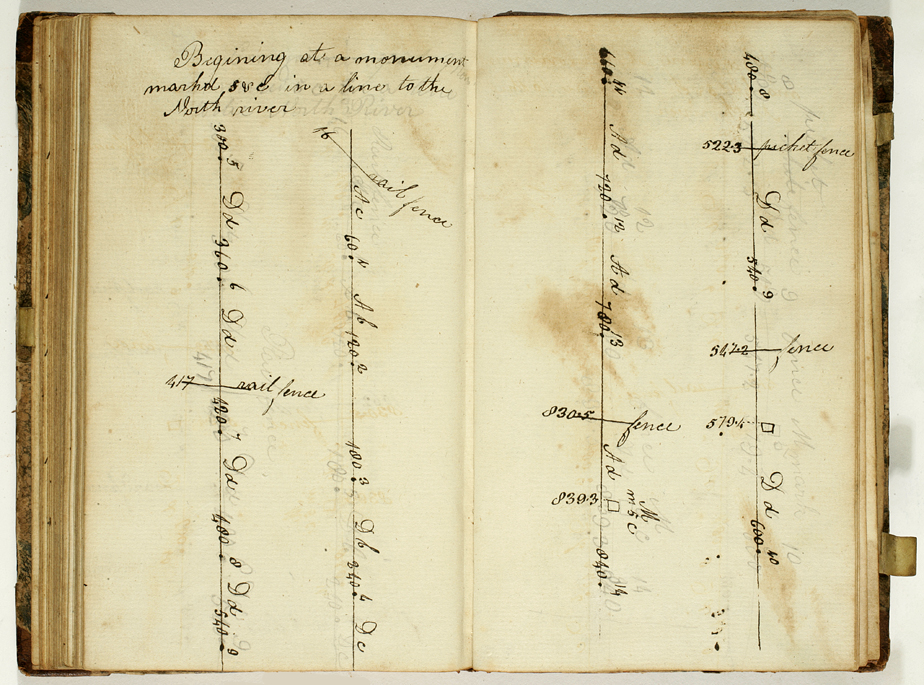 This page is headed by Randel’s note: “Beginning at a monument marked FVC” [and continuing] “in a line to the North river.” Randel is here surveying a future street from east to west.

The first dot in the line is preceded by a “300” written on the line, which might mean that Randel set a marker in the earth at a point 300 links from his “FVC” monument. Here is another convention used by 19th-century surveyors: rather than recording this distance as “3 chains,” Randel cites the equivalent: 300 links.

It was often the case, when surveying across rough terrain, that surveyors would use chains shorter than the standard 100 links. This was because, with each measurement, the chain had to be stretched out perfectly level, with the uphill crewman holding the chain right to the ground, and the downhill crewman lifting his end in the air; with steep terrain and a long chain, the downhill man might not have been able to reach that high. In such cases, surveyors might use a shortened chain of 50 or even 30 links. This 300-link dimension suggests that Randel might have been using a chain of 30 links (the subsequent dimensions along the line are all in multiples of 30).

The next portion of the line is marked “360” and “Dd,” meaning a distance of 360 links across descending terrain (when the line ascends, Randel marks it with “Ad”). The next line segment is marked as 420 links long, but while stretching out those 14 chain lengths, Randel encounters a “rail fence.” His crew would have stretched the last chain-length over the fence, found it crossed the chain three links back from the far end, and so recorded its location at “417 links” and noted its general direction as it crossed the line. BH