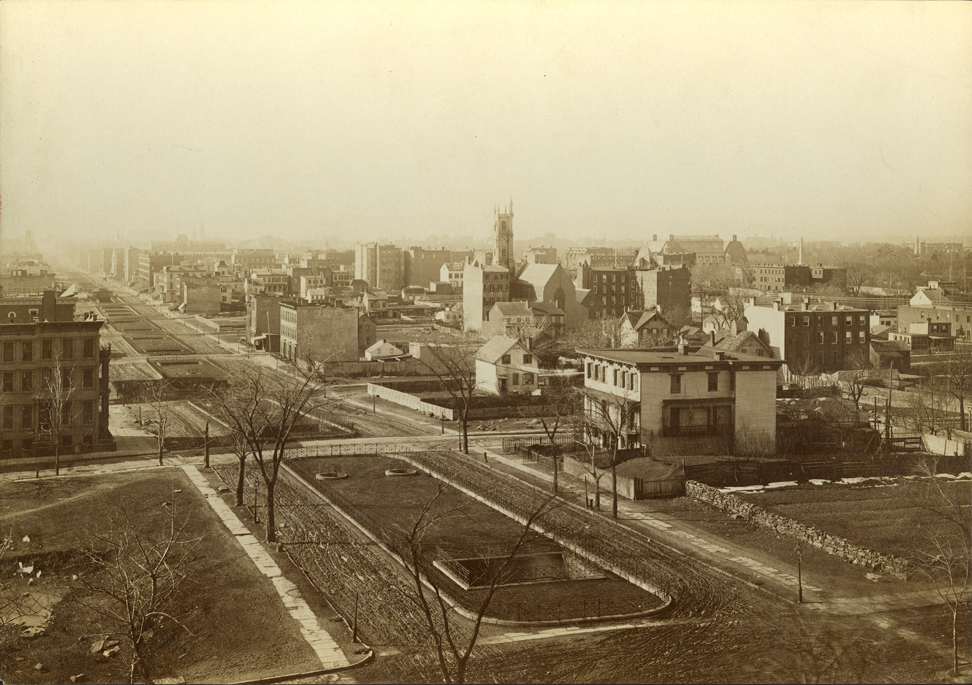 This is the first of 10 photographs that provide a 360-degree panorama from Park Avenue and 94th Street. This view faces south, down Park Avenue. As presented here, the series circles from south to west to north and then east.

In the winter of 1882–83, Bavarian-born photographer Peter Baab took the photographs from the roof of George Ehret’s new mansion on Fourth Avenue between 93rd and 94th Streets. They capture the area on the eve of its emergence as an elegant neighborhood, caused primarily by the transformation of Fourth Avenue into Park Avenue, from a railroad route to a posh, landscaped boulevard.

Ehret, a successful brewer, was one of the first wealthy New Yorkers to move to Prospect Hill (now Carnegie Hill) when he built his home in 1878 on one of the highest points on Fourth Avenue. Pointing his camera southward, Baab photographed the oncoming “march of improvement,” as newly built row houses and speculative development overran the old factories, squatter homes, and farmhouses that had once dominated the area. The “march” headed north, toward open land already cut into grid blocks, which provided a framework for development.

This photograph documents the newly completed boulevard. From the 1830s to the 1870s, the New York and Harlem Railroad ran along Fourth Avenue in an open channel. Beginning in the 1840s, Irish immigrants established squatter homes along the rail line; breweries and factories followed in the 1860s. The neighborhood began to change in 1872, when under public pressure, the railroad president, Cornelius Vanderbilt, sank the tracks below ground from 56th to 96th Street. The project was partially financed by the city and finished in 1876.

In order to accommodate underground tracks, Fourth Avenue was widened to 140 feet and landscaped with a central mall that contained a series of ventilation openings, visible in the photograph. The new avenue did not immediately attract real estate speculators: the Panic of 1873 set off a decade-long recession. But by 1882–83, when Baab photographed the area, Fourth Avenue was beginning to attract residential construction, large mansions, and new institutions. With its new design, the boulevard became known as Park Avenue, a title the city made official in 1888. AR