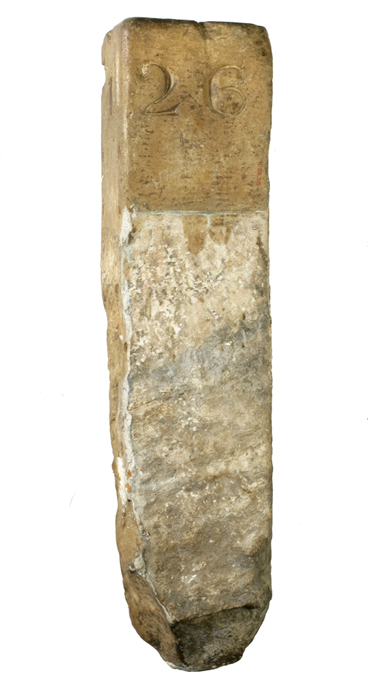 Collection of The New-York Historical Society, 1908.33

The 1807 act of the New York State Legislature instructed the commissioners to erect “suitable and durable monuments at the most conspicuous angles.” These locations, which are noted on the 1811 plan, guided the future layout of streets. Randel continued erecting monuments during his survey work from 1811 to 1818. By his count, he erected 1,549 monuments and 98 iron bolts, where ground rock required the substitution. Compared to typical milestones, the New York grid monuments had stature. They were 3 feet tall with a 9-inch square top. The rough-hewn portion was underground, leaving exposed a polished stone about a foot and a half tall, with handsome numerals carved on two sides. The numbers indicated the coordinates of avenue and street; this monument was placed at the corner of Fourth Avenue and 26th Street. The monuments were made of white marble, a grander choice than the typical milestone made of local stone. Their comparatively grand treatment communicated that the authority of the government was behind the gridding project.

The scale of the monuments was also meant to prevent their removal; Randel initially used wooden pegs as temporary markers and informed the Common Council that he had to remeasure 160,000 square feet of ground because landowners opposed to the grid removed the pegs before the monuments were set.