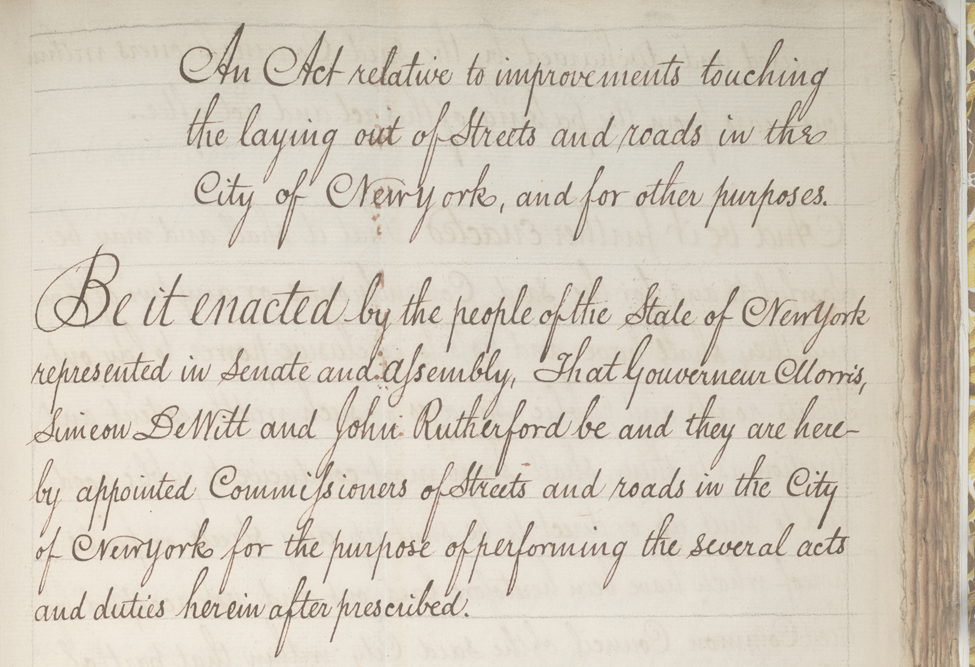 Laws of 1807, chapter 115: “An Act Relative to Improvements, touching the laying out of streets and roads in the City of New York, and for other purposes”

In January 1804, the Common Council, the forerunner of today’s City Council, took the first step to create an urban master plan by directing the Street Commissioner to report on “the practicability and expediency of laying out and opening new streets . . . at right angles, or as nearly so as circumstances will permit.” This instruction was the first indication of the preference for a citywide street grid. The Common Council turned to the higher authority of the New York State Legislature.

In an act of 1807, the state legislature appointed three commissioners—Gouverneur Morris, Simeon De Witt, and John Rutherfurd—and empowered the city to plan its future, with a deadline of 1811 to complete the plan. For a transcription of the 1807 Appointment of the Commissioners, click here.

For practical reasons the 1807 act fixed the plan’s baseline beyond the populous areas, leaving Greenwich Village and the West Village untouched to reduce disruption. But the state legislature understood there would be disruption and resistance, and provided a mechanism to manage this process.

The act set the terms for the first large-scale act of eminent domain in the city’s history. The city would assess the damages to affected property owners whose houses, farms, and estates would have to be cleared or bisected by the new streets. If dissatisfied by the assessed damages, owners could appeal to the State Supreme Court, which would appoint a panel to resolve the issue. Alternately, if the city ruled that the improvement to the property resulting from the new streets enhanced the value of the land, the city could levy an assessment on the owner. Assessments could also be appealed to the court.

Upon their appointment, the commissioners hired John Randel, Jr. as their secretary and surveyor general. Some landowners blocked Randel’s surveyors from their property or undid his work by removing the survey markers. They saw the survey as prelude to usurpation of their land. This resistance led the state to pass another law, on March 24, 1809, authorizing the surveyors to enter any property and to cut trees in order to complete the survey for the 1811 plan.