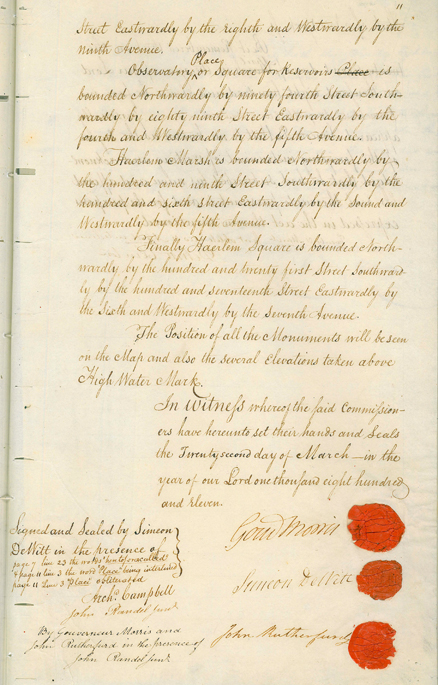 The 1811 plan was accompanied by explanatory remarks; these form the only account the commissioners gave of their work.

The commissioners’ most important decision was to make a rectangular city, rejecting “the supposed improvements” of circles, ovals, and stars as seen in the nation’s new capital of Washington, D.C. and in European capital cities. These plazas created settings for monumental architecture but also irregularly shaped building lots, which meant inefficient plans, customized construction, and greater expense. The commissioners envisioned a city of “right-angled houses . . . cheap to build and . . . convenient to live in.” In a city of shopkeepers and merchants, the rectangular building lot would be the generative form, yet neither the 1811 plan nor the “Remarks” dictated the dimensions of the building lots.

The commissioners provided for several functions they evidently deemed essential: a reservoir; an observatory, which would later be absorbed in Central Park (not part of the 1811 plan); a Grand Parade for military exercises and assemblies; and a wholesale public market. Reflecting their real-estate orientation, these functions were mostly located on unlikely building sites: the reservoir and observatory on rugged, rocky terrain; the market on a salt marsh. Real-estate logic also explains why they stopped the grid at 155th Street, where the rocky and steep hills of Harlem began. To have laid out the grid on this demanding terrain might have stimulated “the pernicious spirit of speculation.”

The commissioners’ claimed that among the options considered, the grid was the least “inconvenient” to current property owners. Yet it has been calculated that 39 percent of pre-grid buildings had to be demolished because they were located in the middle of a new street.