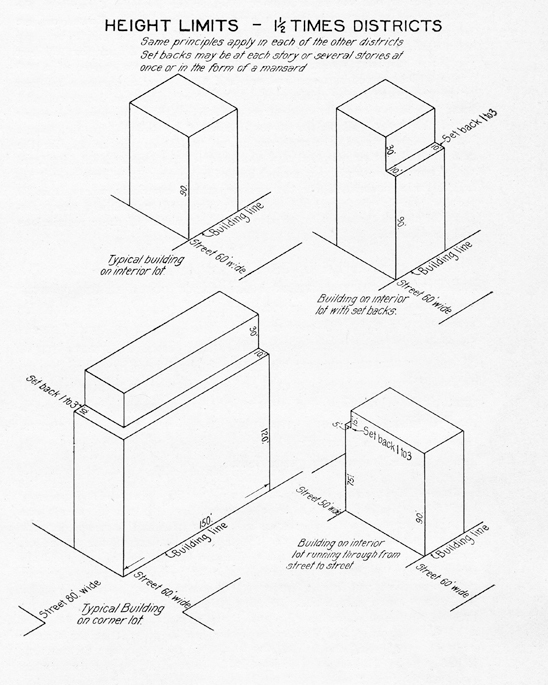 From George B. Ford, New York City Building Zone Resolution, restricting the height and use of buildings and prescribing the minimum sizes of their yards and courts (New York: New York Title and Mortgage Co., 1917), fig. 2

Before 1916 the grid could be extended straight up into the sky along the boundary lines of the streets and lots. But with
the passage of New York’s first zoning law on July 25, 1916, both individual buildings and the future skyline were reshaped in 3-D.

The zoning law imposed a restriction on the volume of space above the property lines that a developer could fill with a building, requiring the structure to step back as it rose in order to protect a measure of sunlight on the street and lower stories. There were five variations of the formula, applied in different districts, based on the width of the street and the angle of the setback. A tower of unlimited height was allowed on 25 percent of lot, a provision that only worked for large lots.

The mastermind of the setback principle was George Burdett Ford, a young architect who served as a consultant to the city’s Board of Estimate and the Heights of Buildings Commission. His simple black line drawings that illustrated the report, and later the law, defined the maximum mass of building allowed on typical lots in the different districts. Since the maximum was exactly what developers sought to build, Ford, as much as any single person, was responsible for the streetscape and skyline of Manhattan from 1916 until 1961, when the zoning law was fundamentally altered. CW