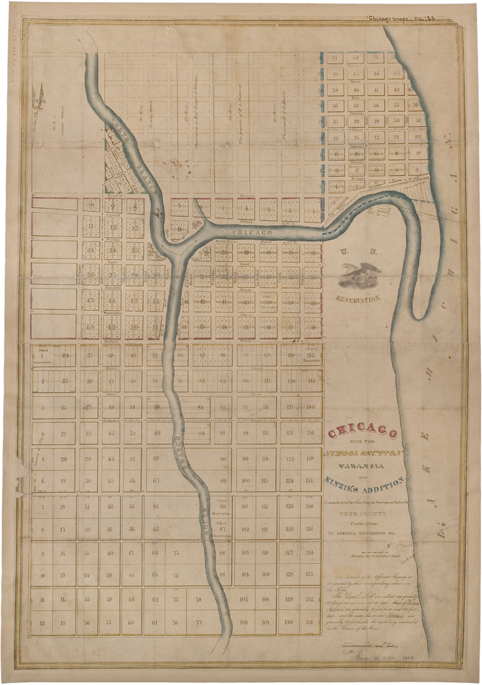 Joshua Hathaway, Jr., Chicago with the School Section, Wabansia, and Kinzie’s Addition, compiled from the four original surveys as compiled in the Cook County Clerk Office, 1834

In 1834, when the population of Chicago was only about 1800, this ambitious grid plan was proposed for the fast growing city. In contrast to the overall grid imposed on Manhattan, this plan comprises several grids, with square and rectangular blocks of varying sizes. The earliest grid was laid out in 1830 at the fork of the Chicago River. Consisting of blocks numbered 1 through 58, it is organized by streets 80 feet wide that outline blocks that are 320 feet wide by 380 feet, including an 18-foot-wide alley that bisects the big blocks. Each block is divided into eight lots, each 80 feet wide by 180 feet deep, which is considerably larger than the standard of 20 to 25 feet by 100 feet in New York City.

The inscription on the map refers to three types of lots: Canal lots (80 by 150 feet); Kinzie Addition lots, north of the Chicago River (50 by 100 feet); and Water Lots (60 feet on Water Street and variable depth backing onto the river).