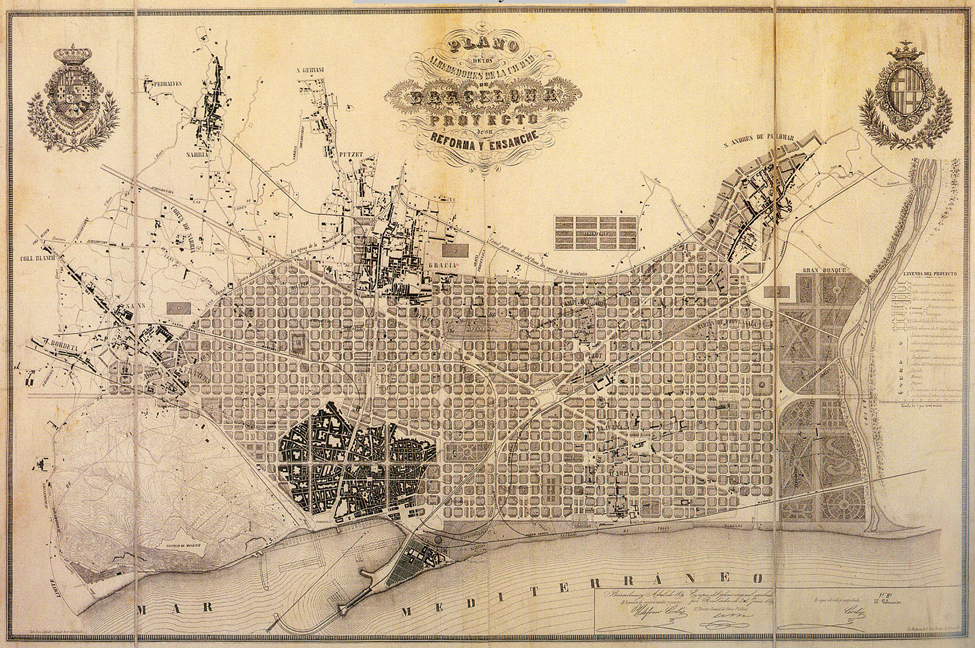 Ildefons Cerdà i Sunyer, Map of the neighborhoods of the city of Barcelona and project for its improvements and enlargement, 1859

The old city of Barcelona is shown in dark, at the lower left, a gnarled and dense knot of narrow, crooked streets. In contrast, the proposed expansion of the city by Idelfonso Cerdà in 1858 greatly enlarges the scale of the grain of the city: the streets are all 66 feet wide and the blocks are 66 feet square. This equality of street and block dimensions meant a grid without hierarchy and orientation, unlike the system of avenues with standard and wide cross streets in Manhattan. In fact, Cerdà used the square block because, as he explained, it is “the clear and genuine expression. . . of mathematical equality, which is the equality of rights and interests, of justice itself.”

The square blocks have two special features. First, the corners are chamfered, which has the space-defining effect of making the intersections more like places or outdoor rooms with enclosing walls. Second, Cerdà projected buildings on two opposite sides of the square, leaving the other two sides and the block interior as landscape; he envisioned only buildings covering only 28 percent of the land. Barcelona of course became more dense and filled in this open space, but the square blocks, chamfered corners, and 66-foot dimension remain defining elements of Barcelona’s grid.