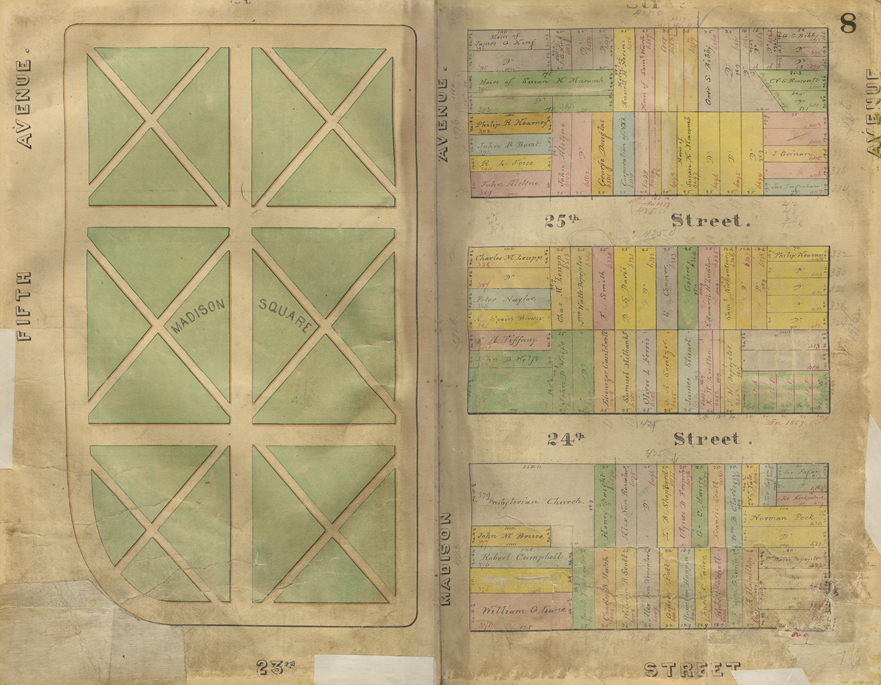 The city used this volume of colorful assessment maps to maintain records of property values and locations for tax purposes. Until the 1820s, the municipal corporation filled its treasury by renting property, including its common lands and wharves, and by collecting license and franchise fees. Property taxes were originally low, but increased as land prices rose. The city’s growing reliance on real estate taxes motivated officials to improve property values by opening streets and parks as a means to collect more money for the municipality. In 1830 property tax revenue amounted to roughly $200,000, but seven years later, it totaled $1.1 million.

The open pages depict the original landscaping of Madison Square. Penciled additions update changes in ownership and lot lines. Land values were much higher and homes were more luxurious facing Madison Square than along Fourth Avenue. In 1860 real estate along Fourth Avenue in the section depicted ranged from $3,500 to $8,000, while lots along Madison Avenue were valued between $18,000 and $55,000. The lot with house number 413 on Fourth Avenue, between 24th and 25th Streets, colored gray on the map, was owned by Mr. Sinclair and valued at $6,000. Directly across, on Madison Avenue, a similarly sized lot shaded pink, with a larger home owned by Mr. Tiffany, was valued at $20,000. AR