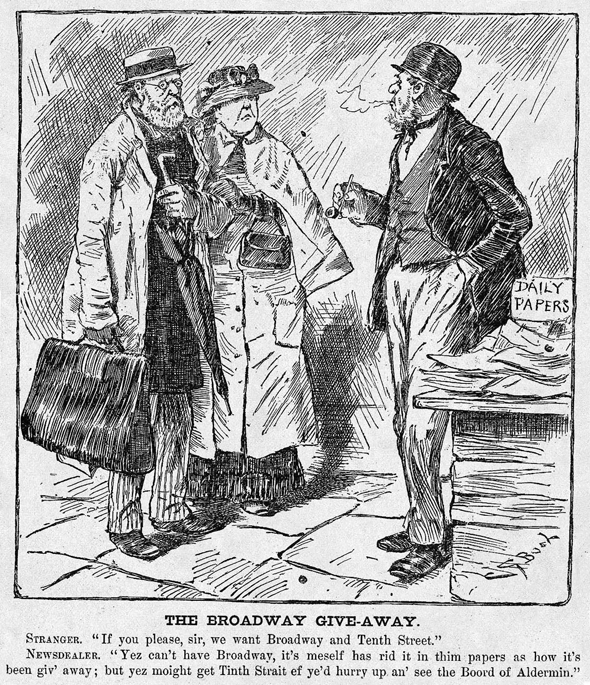 The cartoon mocks the recent corruption surrounding the widening of Broadway. A well-dressed couple approaches a newspaper vendor to ask for directions: “If you please, sir, we want Broadway and Tenth Street.” “Yez can’t have Broadway,” he responds, misunderstanding their question, “it’s been giv’away.” If they hurry and see the board of aldermen, he advises them, they may still have a shot at getting Tenth Street.

New York’s system of street openings was riddled with graft, but perhaps none was able to take advantage of the process as proficiently as William “Boss” Tweed, the Tammany Hall figure who has come to represent the heights of Gilded Age political corruption. Tweed had wanted to widen Broadway and transform it into a Champs Elysées for New York, but unable to execute such an ambitious plan, he settled on expanding the boulevard from 32nd to 59th Street, a plan the State Legislature approved in 1871.

Tweed and his associates knew in advance when and where street work was to be done, and they purchased every available lot fronting Broadway in the section to be widened. Although these lots increased in value as a result of improvements, Tweed and his circle made most of their money through street openings. He ensured that the city paid inflated amounts when it purchased the land from private hands. In many instances, the city paid more for a sliver of a lot than the owner had paid to buy the entire property. In fact, the city paid three million dollars for Broadway street openings before ground had even been broken. AR