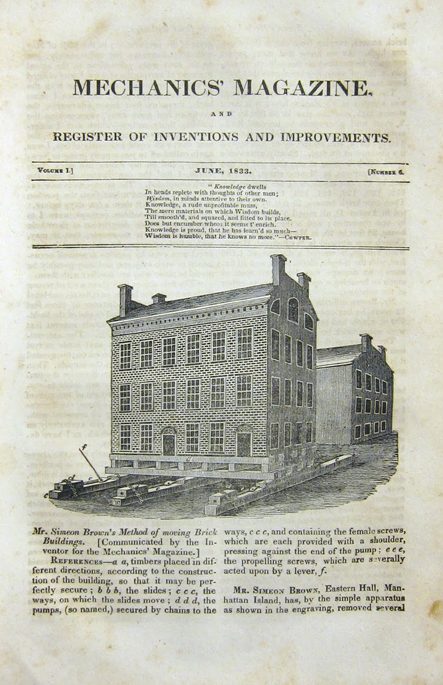 Mechanics’ Magazine and Register of Inventions and Improvements, June 1833

In the 1830s, British visitors to New York began to remark on a “very extraordinary” and “curious” local custom: house moving. If a house stood in the way of a new or widened street, the City Corporation forced the owner to remove it. Houses of little value were torn down, but some owners of more expensive dwellings elected to move their houses, in their entirety, to new sites.

Simeon Brown, the son of a house mover, pioneered the system of moving brick dwellings in 1823 and became its most famous New York practitioner. In 1833 Mechanics’ Magazine published Brown’s “Method of Moving Brick Buildings,” which he had patented in 1827. He based his technique on the procedure for transporting boats in shipyards, employing a similar framework of beams, screws, and cradles to push houses three to four feet a day. As the city’s street-building campaign grew, so did Brown’s business. He not only transported structures to new locations, but also raised and lowered them to new street grades. By the early 1830s, Brown estimated that he had used his method to move about 900 buildings of both frame and brick construction. AR