A New Avenue between Fifth and Sixth Avenues, 1910 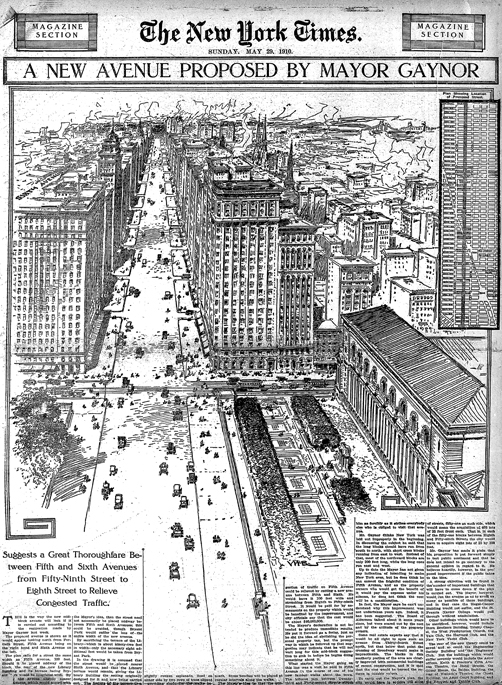 Back to Gallery
Image 33

Of the various proposals sought to relieve the heavy congestion on New York’s avenues, few were as bold as Mayor William Jay Gaynor’s 1910 proposal to cut a new artery between Fifth and Sixth Avenues from 8th to 59th Street. In order to gauge the public reaction, he commissioned this illustration, presenting a broad avenue flanked by tall office buildings, which was published in The New York Times. In the foreground, Bryant Park, the backyard of the New York Public Library, is severely truncated by the new avenue. An audacious proposal, it could only have been realized through large-scale destruction. The inset map in the upper-right corner displays the new avenue as a dark bar cutting through the city and lists some of the important buildings that would have to be knocked down, including the Harvard and Yale Clubs and Trinity Chapel.

The mayor’s grand proposal came with an equally grand cost: $40 million. However, Gaynor did not intend to have the public pay for it. Instead, he planned to return to the city’s system of assessing property owners who would benefit from the opening of the new avenue. The mayor was unable to push his plan forward. Three months after unveiling the proposal, he was shot by a disgruntled employee and died from the wounds three years later.

Other proposals to cut the long West Side blocks with new north–south avenues have been proposed from to time, none gaining any traction. This impulse was channeled into a new solution opened up by the 1960 Zoning Resolution: mid-block arcades within buildings. See Modern Reforms, 20th Century–Now. AR