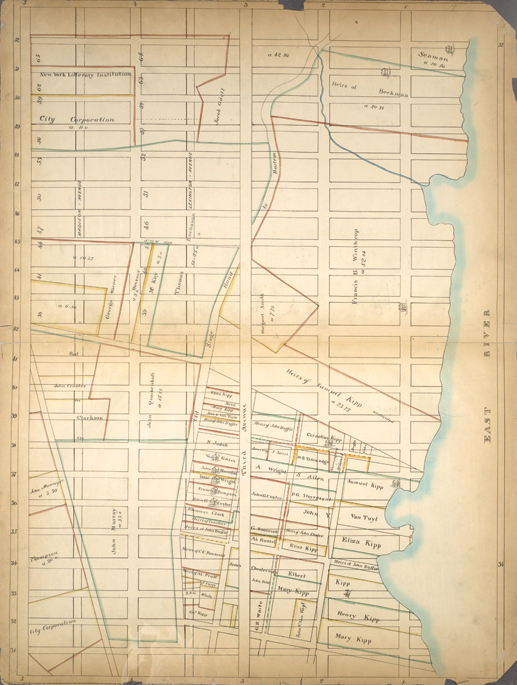 Back to Gallery
Image 19

Third Avenue runs down the middle of this Sackersdorff Farm Map. Opened in 1814 as a primary east side thoroughfare, it connected Bowery Road to the Harlem Bridge. The plan illustrates the various intervals that separate Manhattan’s East Side avenues. The 1811 commissioners established blocks 650 feet wide between First and Second Avenues, 610 feet between Second and Third Avenues, and 920 feet for the blocks between Third and Fifth Avenues. The 920-foot blocks were the widest on the 1811 plan, but the insertion of Lexington and Madison Avenues in 1833 transformed them into the shortest. Ruggles laid out Lexington narrower than the grid’s standard 100-foot avenues, in order to reduce its encroachment on private property. He did not place the new avenue at the exact midpoint between Third and Fourth Avenues. Instead, the block east of Lexington is 420 feet wide and the block to the west is 425 feet. In establishing Madison Avenue, the Common Council decided to use the same dimensions: it is 75 feet wide, and its edges lie 425 feet from Fourth Avenue and 420 feet from Fifth. AR