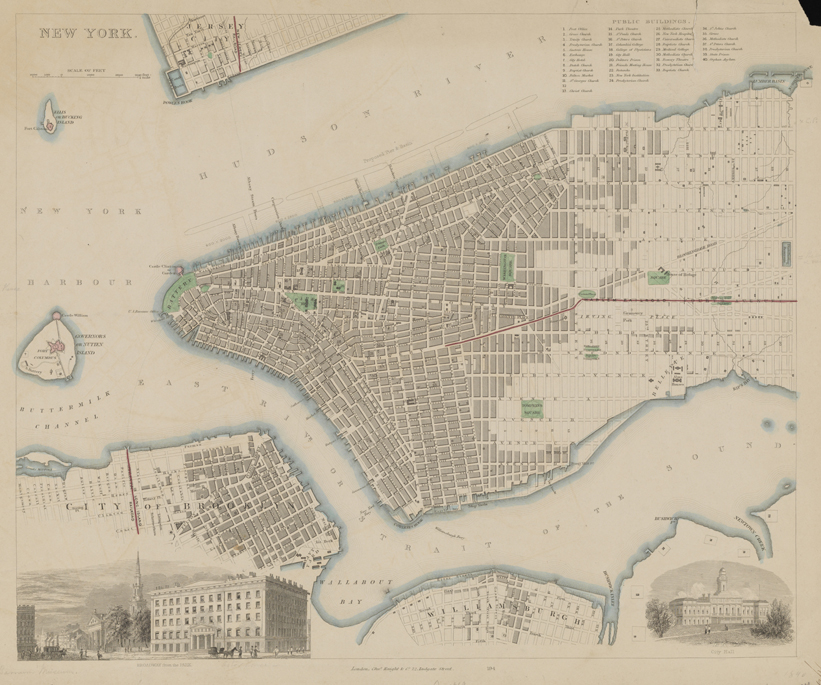 Back to Gallery
Image 18

Plan of New York, published by the Society for the Diffusion of Knowledge, 1840. Lithograph

The Society for the Diffusion of Knowledge, established in 1828 in England, published a series of inexpensive maps to educate the general public. Their plan of New York details the area below 42nd Street, with the white blocks indicating future development. The two inset views illustrate Broadway and City Hall, and the map details of Brooklyn, Williamsburg, and Jersey City suggest a regional network bound by the waterfront economy.

The map depicts the two new avenues established in the 1830s: Irving Place (called Lexington Avenue north of 21st Street), between Third and Fourth Avenues, and the then-unnamed Madison Avenue, inserted between Fourth and Fifth Avenues and extending north from 23rd Street. The red line marking the course of the Harlem Railroad runs between the two new avenues. The avenues were created to fix a problem in the Commissioners’ Plan: the 920-foot blocks between Third and Sixth Avenues, a great distance that landowners found to be “inconvenient and injurious to the value of their property.” The Common Council agreed and pushed the state legislature to pass an act in 1833 that extended Irving Place to 42nd Street, laid out a new thoroughfare between Fourth and Fifth Avenues, and created a new square on either side of Fourth Avenue, as displayed on the map, which was later abandoned.

The green spaces pop out and highlight the new squares and parks that were developed in the early decades of the 19th century although unanticipated by the 1811 plan: Washington Square, Tompkins Square, Stuyvesant Square, an expanded Union Place, and Gramercy Park (uncolored). Included as well is Madison Square, the much-reduced vestige of the Commissioners’ Parade, and a proposed Murray Hill Square. AR