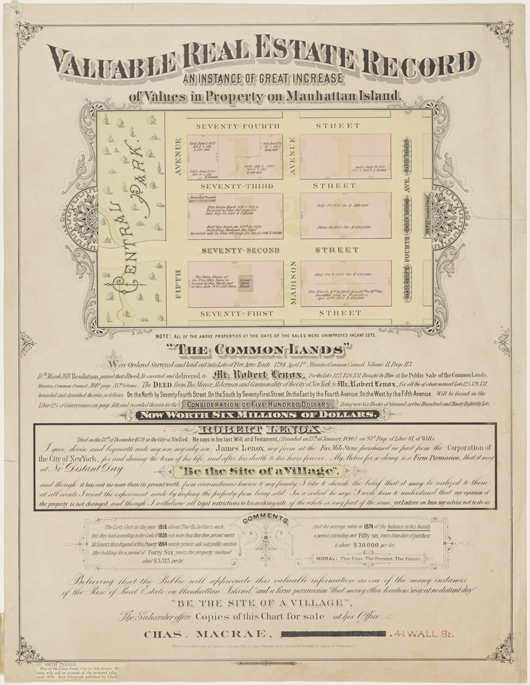 “Valuable Real Estate Record. An Instance of Great Increase of Values in Property on Manhattan Island,” 1874

This broadside celebrates the rising value of Manhattan real estate, as exemplified by the Upper East Side estate of Robert Lenox (1759–1839). In 1818, according to the print, Lenox paid $500 for the three blocks between Fourth and Fifth Avenues from 71st to 74th Street. The highlighted area was only half of his purchase: in total Lenox bought six blocks, or 30 acres, from 68th to 74th Street, and according to The New York Times, he paid $6,920, about seven times more than this print claims. The block numbers on the print, 125, 128, and 131, derive from the Common Lands subdivision of 1794, with which the Commissioners’ Plan of 1811 was largely aligned. The opening of Madison Avenue then split the blocks nearly in half. If the six blocks were subdivided into typical 25-foot-wide lots, the resulting 189 lots would be worth $6 million in 1874, according to the print.