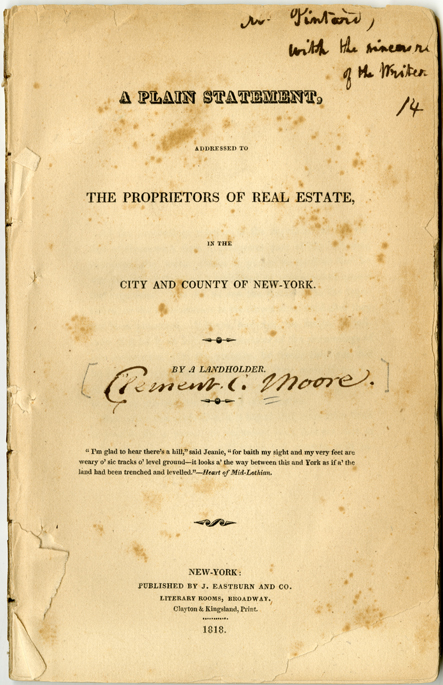 Clement Clarke Moore, A Plain Statement, Addressed to the Proprietors of Real Estate, in the City and County of New-York (New York: J. Eastburn and Co., 1818)

Indignant over the way the city’s roads had been cut through his family’s country property, Moore published A Plain Statement in 1818, beseeching landowners to rise up against the “injustice, cruelty and oppression” of the street opening system. As Moore viewed it, the Commissioners’ Plan of 1811 had failed in one of its central missions: to provide a predictable system of growth. The plan had only settled the question of where roads were to be built, leaving issues of street grades, assessments, and construction schedules unresolved and in the hands of the street commissioner. Moore was further outraged that proprietors were forced to “furnish the means of their own destruction,” by financing the new roads that damaged their own property. Moore wanted to preserve some of the island’s natural topography. In his view, reducing the land to a “dead level” was unnecessarily costly and eliminated the island’s natural beauty and elegance. AR