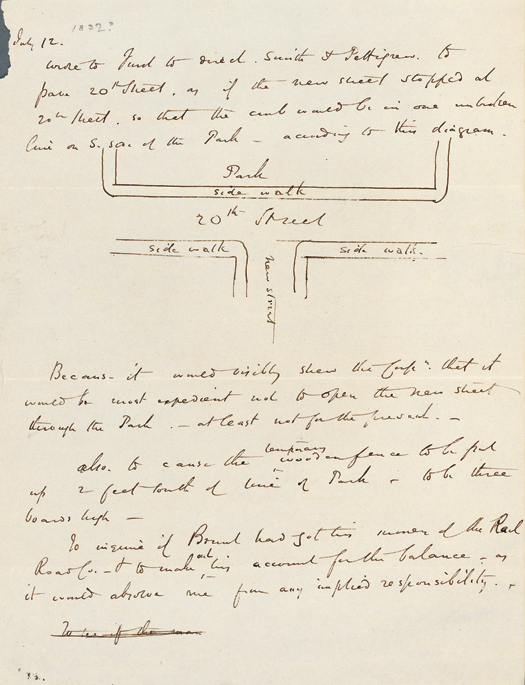 Samuel B. Ruggles assembled the old Gramercy Farm through dedication and cunning maneuvering, the same set of skills that he used to transform the area into an elegant neighborhood. In a memorandum written in the early 1830s, Ruggles describes how he wanted to pave the south side of Gramercy Park. The sketch depicts the intersection of 20th Street, which the city had opened and graded before Ruggles purchased the area, and the “new street,” soon to be opened, Irving Place. The legislature gave the city the authority to open the road through the park to 30th Street, but as the memo indicates, Ruggles schemed to keep Gramercy Park intact as a pleasure ground for his elegant neighborhood. He had the intersection paved so that the new street terminated at the park, as a T-shaped junction with continuous sidewalks along its edges. As he explained in the document, he wanted to show city officials that “it would be most expedient not to open the new street through the park—at least not for the present.” Ruggles’s vision won out: in 1835, the city opened Lexington Avenue north of Gramercy Park. AR