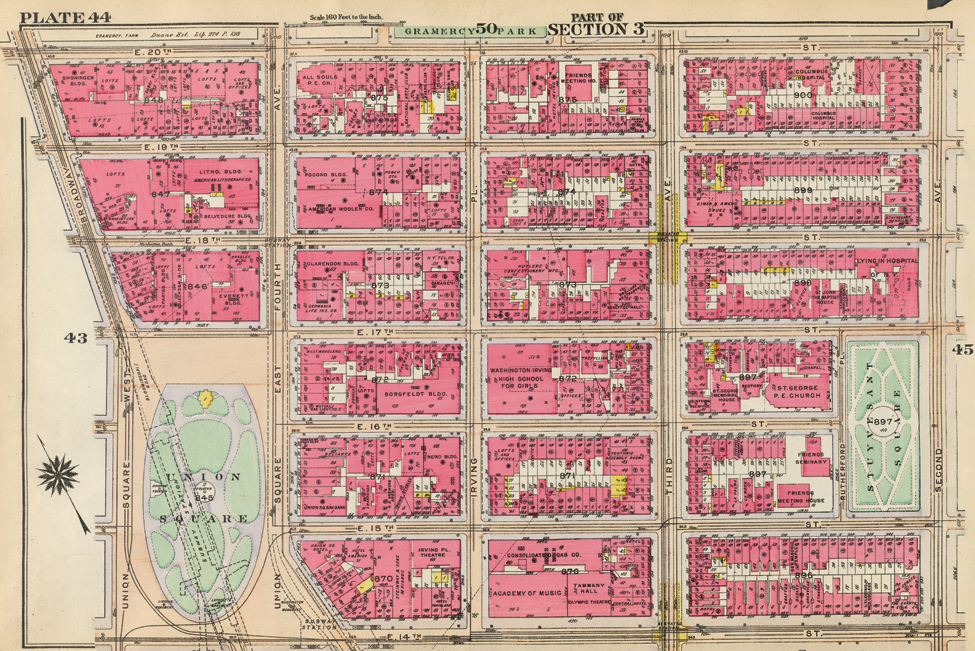 As seen in the 1916 Bromley map, Union Square had become nearly rectangular in shape, incorporating the logic of the grid in its outlines. The map shows the landscape design of Frederick Law Olmsted and Calvert Vaux, who redesigned the park in 1872. Large commercial buildings had replaced the elegant town houses and genteel gentlemen’s clubs, and the area became known as a center for entertainment and luxury shopping. Crowds began to encroach on the square, which was increasingly used as a staging area for public celebrations and protests. In 1871 the fence and hedge surrounding the park were removed to provide greater access, and in 1872 the Department of Public Parks commissioned Olmsted and Vaux to redesign the Square.

Their plan accommodated the new urban uses of the park. The designers truncated the north end of the ellipse and create a 300-by-100-foot paved “muster ground” for public gatherings, at the north of the square along 17th Street. The muster ground was soon used for all kinds of civic gatherings, from Fourth of July and Columbus Day parades to labor demonstrations, mass meetings of antiwar demonstrators during World War I, and gatherings of unemployed workers during the Depression. In its new form Union Square was truly a civic space, a “theater adequate to the utterance of the national voice,” as Ruggles had predicted a decade earlier. JMS