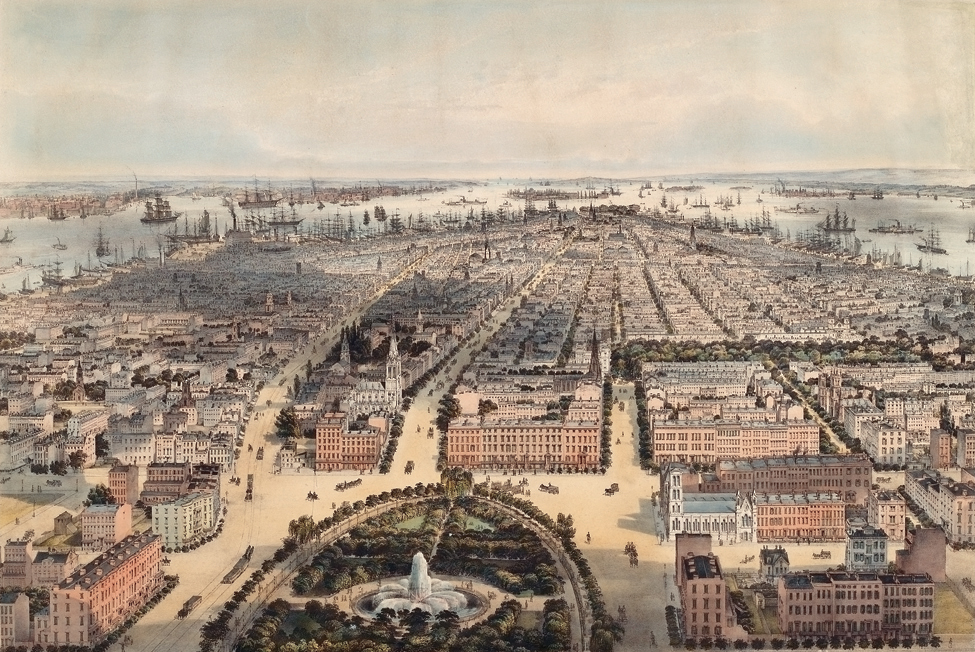 Although the commissioners responsible for the grid intended New York to be a wholly American city, removed in form and intent from the Old World, by the middle of the 19th century New Yorkers were again looking to Europe for inspiration. This richly detailed bird’s-eye view of the city by C. Bachman illustrates the Union Square that Ruggles had envisioned in the 1830s—a fashionable, elite residential enclave modeled after London’s 18th-century Cavendish, Berkeley, and Grosvenor Squares. This view illustrates the elegant row of townhouses Ruggles built on the east side of the square and two Gothic Revival churches by James Renwick: the Congregationalist Church of the Puritans (1846–47, now destroyed) on the west side of the square, and Grace Church (1846–47) between 10th and 11th Street, a few blocks to the south on Broadway. The horse-drawn cars of the Harlem Railroad, which began service in 1832 between Union Square and the Battery, can be seen on the left, working their way up Fourth Avenue. The oval garden, surrounded by an iron fence, is lush with semiformal plantings of trees and shrubs; its centerpiece is a fountain that was erected in 1842 to celebrate the opening of the Croton Aqueduct and the inauguration of a citywide water supply. JMS